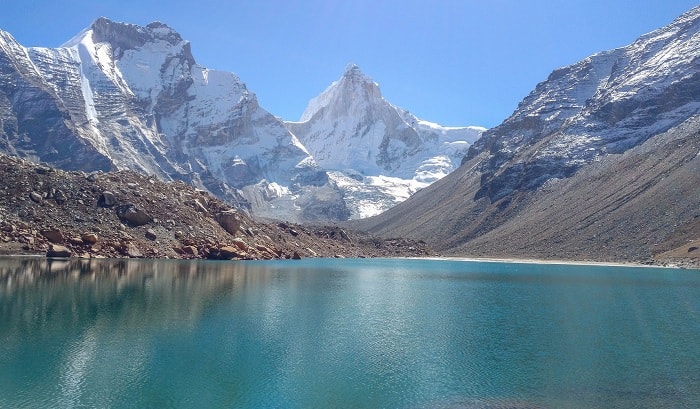 Uttarakhand is located in the northern India and is a place that has something to offer for every visitor visiting the place. It is a beautiful place that is also called the land of lakes and waterfalls. It is a place where one can find some of the most beautiful landscapes, mountains, etc. There are a number of beautiful and picturesque lakes in Uttarakhand.

Sat Tal: Sat Tal is one of the major tourist attractions, situated in the Nainital district of Uttarakhand. The term Sat Tal, in Hindi, means ‘seven lakes’.

Vasuki Tal: Uttarakhand is one of the most beautiful state in India and lakes in Uttarakhand makes the place more scenic and mesmerising.

Kashni Tal: Situated by the Madhyamaheshwar temple, this serene lake can be visited on the way to Kedarnath and Badrinath. It is a part of Garhwal Himalayas where a river Madhyamaheshwar Ganga originates.

Naini Lake: One of the appealing lakes in Uttarakhand, Naini Lake or Nainital Lake is situated in Nainital. It has a crescent shape and there are various legends related to it.

Satopanth Tal: A mountain lake by nature, Satopnath Lake is situated amidst snow-capped peaks. It holds lots of religious significance for the local people residing here.

Sattal: Sattal or Sat Tal means seven lakes and it is a group of seven fresh water lakes in Bhimtal. Verdant orchards are found by the landscape just above the lakes. Oak and pine trees form the lush green backdrop.

Shyamla Tal: This Lake in Uttarakhand is renowned for Swami Vivekananda Ashram which is located at the bank of the lake. Legends of Pandavas and Chand rulers are associated with the lake. The blue colour looks pictorial as it attracts many photographers.

Bheemtal: Bheemtal Lake situated in Bheemtal is a unique lake in Uttarakhand. An island at the middle of the lake is the largest lake of Uttarakhand. This lake is perennial and houses innumerable water species which are worth discovering in Uttarakhand tourism. It attracts many birds from the Himalayas.

Dodital: A freshwater lake, Dodital is regarded as abode of Lord Ganesha. Tourists coming here can halt at forest houses which are maintained by the Forest Department.

Sahastra Tal and Masar Tal: Trekkers who are venturing the Khatling glacier will come across these two lakes in Uttarakhand which lie on either side of the glacier.

Hemkund: Though Hemkund Sahib is a pilgrimage destination for Sikhs, Hemkund Lake is a mountain lake which is surrounded by seven mountain peaks. Located in Chamoli district, this lake looks gorgeous during winters when it is fed by glaciers.

Kagbhushandi Lake: This Lake in Uttarakhand is on the way to Valley of Flowers. Situated in Vishnuprayag, the crystal clear water of the lake grants a magical stature to the lake.

Vasuki Tal: Situated at a height of above 4135 m, Vasuki Tal is a gorgeous lake of Uttarakhand tourism. A mountain lake by nature, Vasuki Tal is 8 km from Kedarnath.

Chaukhamba Peak surrounds the lake. Visitors are suggested to pay a visit during the months of June to October as weather conditions become too harsh before and after that. Apart from pilgrims touring to Kedarnath, Vasuki Tal is also a photographer’s hub.

Maneri: Maneri Dam is responsible for the production of hydroelectricity. Situated in Uttarkashi, it is located on the left bank of river Bhagirathi. A magnificent lake has formed here which looks dazzling with the reflection of sunlight.

Govind Ghat: This sublime lake leads to the famous Hemkund Sahib and Valley of Flowers. While the former is 20 km trek from this lake in Uttarakhand, the later is around 17 km. Located in the Chamoli district, the lake has formed by the rivers Lakshman Ganga and Alaknanda.

Kedar Tal: Kedar Tal is a mountain lake which is formed from glacier. Situated in the Garhwal region of the Himalayas, the lake holds mythological importance. It is an important trek route where trekkers come across various Himalayan birches and rocky landscape.

Nachiketa Tal: This Lake in Uttarakhand is 3 km trek from Chaurangkhal which is 29 km from Uttarkashi. The serenity by the lake is ideal place to soothe your tired nerves. The temple located by the Nachiketa Tal also attracts many pilgrims.